The much heavier Karmacode surfaced in April 2006 and proved to be their true commercial breakthrough, charting well worldwide and going to no. 28 on the Billboard Chart. After the success of the album, the band continued to tour, hitting the metal festival circuit. In 2008 they went into the studio with Linkin Park producer Don Gilmore, and the following year released their fifth album, Shallow Life. A deliberately much more commercial effort with strong pop-metal influences, the album was their biggest seller to that date but divided their fanbase. Dark Adrenaline, again with Gilmore at the helm, arrived in 2012 and marked a slight return to their darker, heavier sound.

Lacuna Coil went even farther with their next effort, Broken Crown Halo. Ditching Gilmore for Jay Baumgardner (Evanescence, Helmet, Drowning Pool), they recorded in an antique Milan studio with vintage analog equipment, resulting in an album with a thick, crushing sound which harked back to Karmacode. Just before the release of the album, Migliore and Mozzati announced they were leaving the band for personal reasons; the rest decided to press on, recruiting former The Agony Scene drummer Ryan Folden for the upcoming tour.

Silke:“ How does the album differ from the previous ones and how is it similar?”

Andrea Ferro: “In this album, we were more free in song writing. We were going where the music was taking us. We haven’t really think about staying in the cliché of the Lacuna Coil songs. We went all the way back to the old Lacuna Coil with more extreme songs. We just pushed on the button of the extreme. We tried to add some different moods. We didn’t care so much if it was actually fitting in our standards. We began a new chapter in the band. We have a new drummer on the record. It’s a bit different. There is a bit more rhythmical patterns on the drums because our drummer has a different style compare to Christiano, our previous drummer. We gone free and please ourselves. We wanted to go musically without caring too much. That are the main differences. It sounds a bit fresher.” 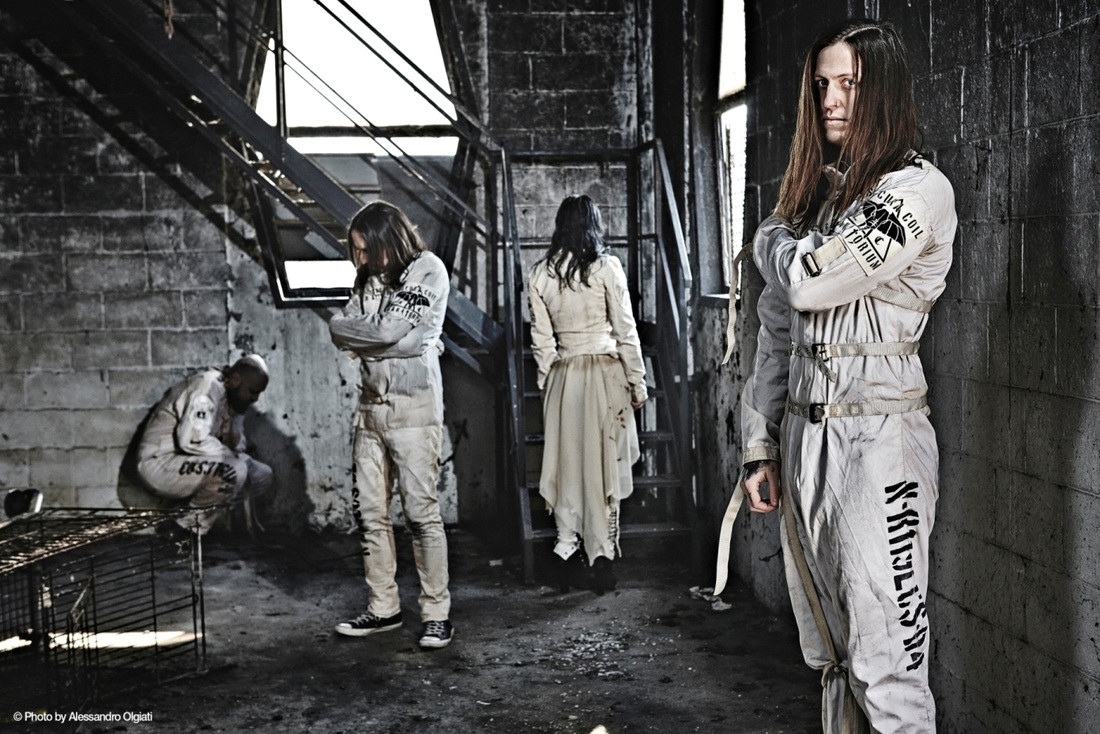 Silke: “This album sounds heavier than the previous albums, are there any reason for that?”

Andrea Ferro: “Yes, there are some songs that are pretty heavy. Probably one of the heaviest and darkest songs we ever wrote. It takes us to different places. It’s an album with probably the heaviest riffs we ever wrote. We haven’t been worrying too much. We just followed the natural flow in our songs.”

Silke: “Where do you get your inspiration from for the lyrics?”

Andrea Ferro: “Basically the lyrics are about a sanatorium. A big and old building with a lot of empty corridors and rooms. Where there are a lot of different stories and different people with a lot of different problems. They try to overcome their problems, sometimes with good results and sometimes with terrible results. The inspiration is good and bad at the same time. We have seen a real old sanatorium and that gave us the inspiration of building this sort of story. It’s about the more difficulties in daily life. The pieces that won’t fit the puzzle the way you want it. We embraced the album with a very open mind and free spirit without caring too much about their suffering and happiness. Just follow the music and find your space in the songs.“

Silke: “Christiano Morazatti and Cristiano left the band, did you have a hard time finding a solution?”

Andrea Ferro: “Ryan already was playing for us so that was the natural substitute for us. Ryan was Christiano’s drum technics some years ago and when Christiano was less and less on the road because he wanted to change his lifestyle, Ryan was already taking over. It was normal for us to ask him to join the band. He’s a great drummer. He’s a guy with an great attitude and passion for music. He’s very young and has already a lot of experience. It was a natural choice. Cristiano retired from the band as well for the same reason and we decided to stay with one guitar and rearrange some of the songs for just one guitar.”

Silke: “How was the collaboration with Ryan Blake?”

Andrea Ferro: “It was great! It was the first time we recorded with him in the studio. He has done everything in three days. He’s pretty amazing. He’s a very good drummer and variable to our style of music. We have been pushing more to the rhythmical side of the music because he has a different style compare to our old drummer. We decided to push the accent more to the double bass. He’s great. He’s been doing everything really really fast. He helped us in the studio as well.”

Silke: “You had one guitar missing, was it difficult to adjust?”

Andrea Ferro: “Yes, we are trying a new guitar player. He’s coming from Milan, Italy. We going to try him in the upcoming tours. He’s now some kind of trainee before we want him to be our permanent guitarist. We want to make sure he’s feeling well with the band. If you’re on the road, you’re together for a long time in a very tight space and we want to make sure we come along. We will try and see and if everything works out well, we want to make him a permanent member of the band.”
​Silke Goethals - Photo’s: Alessandro Olgiati © and Steve Prue (background picture)