Guitar and vocals in the band Bombus

Keys & Chords: “The artwork of the 3 CD’s is totally different. I mean there’s no relation between the first with only the name, the second with a building and what’s on the new album? What’s on the image?”

Feffe: “It’s a weird, futuristic factory. We wanted something neon, splashy with almost a Miami beach feeling to it. Something that catches the eye. If you have seen the movie ‘Drive’, you know what I mean, with the neon lights and all. The guys at the table are us four, like we are mounting stuff for the factory. Although the artwork is different on the three albums, it’s the same guy that did them.”

Keys & Chords: “Is there a relation between the different artworks and the music style on the three albums?”

Keys & Chords: “So how did the music style change between the albums?”

Feffe: “Every album you can make it closer to the essence of the band. What the band should really sound like. And in the beginning, the first album, it was a bit all over the place. I still like it, but it’s going in different directions. The songs are not really coherent. And the second album ‘The poet and the parrot’ is much rougher, it has longer songs and the production is a lot dirtier. And on the latest album, we had a clear picture of what we wanted to make. How we wanted to sound. How we wanted it to be focused. It was cleaned up and just focused on the good stuff and take everything else out. We play much better. We wanted to make It perfect. We made every note on the album the way we wanted it. Also production wise it had to be perfect. The sound had to be clean, clear but still rough. There’s no trigger on the drums, it’s all acoustic. The way we approached this album, is that we made shorter songs, almost like pop songs. We focused on the hooks, but still keep it the way we sound.” 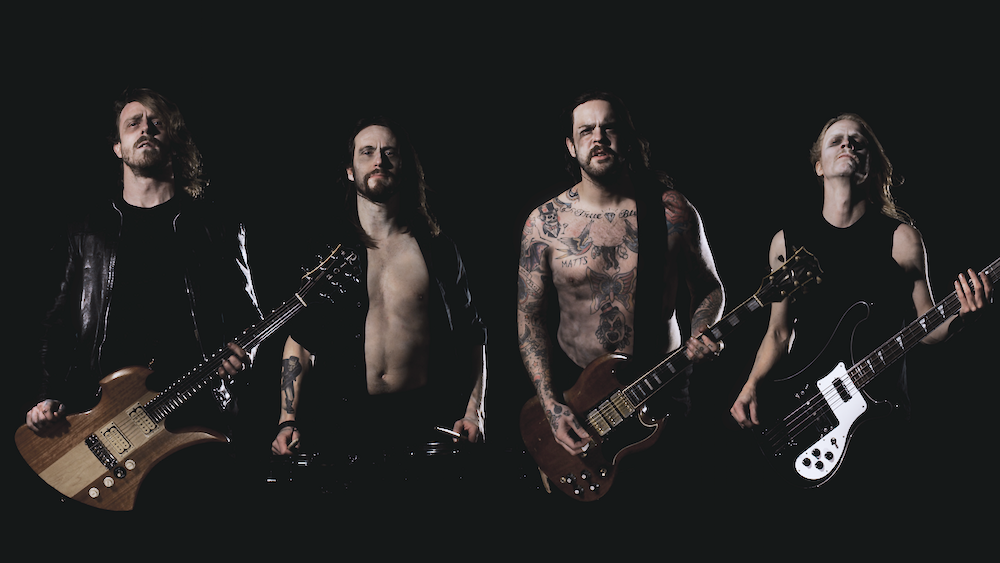 Feffe: “It’s the guitar line. When I wrote the song on the first album, I always knew that I could use it for something else. It took me a few years to get to this song. So we stole it from ourselves.”

Keys & Chords: “Is there a concept on this album?”

Feffe: “No. I used to enjoy making albums. But, what’s important. Is it like reading a book with chapters of which the order is important? Now, when I write music, I focus on each song. I enjoy that more than putting a whole album together. So, there’s no concept, except trying to make good music.”

Keys & Chords: “Can you tell about some of your lyrics? Not the whole album, only a few.”

Feffe: “For my lyrics, I think about real subjects. Things that happened in life. There are no fantasy lyrics or stuff like that. ‘Horde of flies’ is a bit of a political song. We are not a political band and we don’t have a message but we have opinions and they kind of shine through in the songs that we make. ‘Horde of flies’ is about some people taking it all and some people getting nothing. ‘Shake them for what they’re worth’ is a bit the same subject with different words. It’s always about stuff you think about from everyday life. ‘Deadweight’ is the single. It’s a video and a digital downloadable track, not a physical single. The album is a real CD and also a vinyl album.”

Keys & Chords: “Vinyl is really coming back. Everyone has it now.”

Feffe: “Yeah, I used to collect vinyl. I have a big collection. Nowadays I don’t care much about the format, I just enjoy music. I think the streaming services on the digital platforms are great for music, like Spotify, and I think that’s good. It works fine, I use it every day, but when I come home I like to put on an LP.”

Keys & Chords: “You’re not very lucky with your bass players.”

Feffe: “Haha, no, it’s like in the movie ‘Spinal tap’, where all the drummers die. It’s like that with bass players for us, but they are still alive. Yeah, we have a new bass player on every album. When you work hard with a band and it takes a lot of time and you’re out playing and touring, some people have lives outside the band. That was what was going on with our bass players. But the latest is the one. He’s in the band to stay.”
Keys & Chords: “Is there a question you wanted me to ask? A question you miss on every interview?”

Feffe: “Well, that’s difficult. But indeed, when I’m doing promo for an album, journalists always ask the same questions about the music and the album. You can almost copy/paste the answers. A lot of questions are just the same. But people want to read those things, so if a journalist goes outside the box, people don’t get what they want. And they don’t want to go there. It’s the same with music. A lot of bands just wanna give the audience what they want to hear, instead of trying to change that. Sometimes I wish that a journalist asks more about the songwriting process.”

Keys & Chords: “So I should have asked how you write your songs?”

Feffe: “No not really, because I’m writing them with my guitar. But a lot of journalists wanna talk about other bands and about the scene and they don’t talk so much about music, really. They should talk more about the passion for music and sharing that passion. They know a lot about metal, but not so much about music in general, not from a certain genre. Me myself, I’m not into bands or genres, I’m more into songs.”

Keys & Chords: “Thanks for the interview. Maybe I speak to you again when you have a fourth album.”